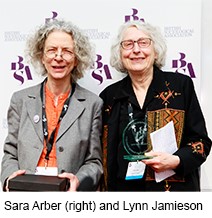 This year's BSA Distinguished Service to British Sociology award has been given to Professor Sara Arber.

She was given the award by the President of the BSA, Professor Lynn Jamieson, at the BSA's annual conference at the University of Manchester today.

Professor Arber said she was “delighted and deeply honoured to receive this prestigious award.

"I joined the BSA in 1974, 43 years ago, and the BSA has been absolutely fundamental to my career, as have its study groups, particularly the Medical Sociology group.

"The camaraderie, collegiality, support and intellectual stimulation from the BSA and Medsoc have been invaluable."

Professor Arber is Co-director of the Centre for Research on Ageing and Gender at the University of Surrey. Her research focuses on gender and class inequalities in health, ageing and later life, and on the sociology of sleep.

Her book, Connecting Gender and Ageing (co-authored with Jay Ginn), won the 1996 Age Concern prize for the best book on ageing.

Professor Arber was President of the British Sociological Association from 1999-2001, and is currently a Vice President.

She received the British Society of Gerontology Outstanding Achievement Award 2011 for her contribution to the field of ageing.

She is currently a member of seven journal Editorial Boards, including the Journal of Aging Studies, Research on Aging, and International Journal of Social Research Methodology and is a Fellow of the British Academy, the Royal Society of Arts and the Academy of Social Sciences.